This is an illustration I was working on yesterday. It's for a very large 4th grade math book. I have a couple of other maps in this book which I may post another time...
Posted by edfredned at 7:22 AM No comments:

Here's the finished version of the sketch I uploaded a few days ago. I realize now that I have to change the name of this illustration since I colored the fish in a non-goldfishy way.
Posted by edfredned at 2:13 PM No comments:

A quick sketch for a promo book illustration. I was really trying to show the care with which the crocodile is carrying the fishbowl. 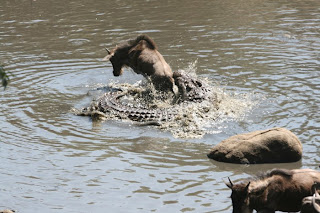 And here's a picture I took in Tanzania of a decidedly less friendly crocodile trying to take a bite out of a wildebeest it had sneaked up on. Somehow, the wildebeest got away unscathed, but probably had a heart attack an hour later.
Posted by edfredned at 9:27 AM No comments: