My take on the GAP logo debacle. 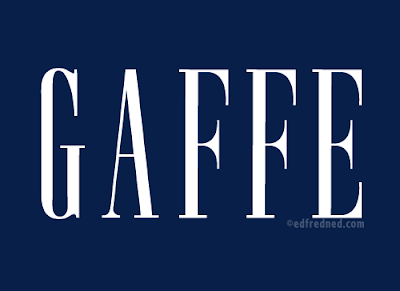 Posted by edfredned at 8:46 PM No comments:

I attended an event tonight presented by Social Media Club Boston at Hill Holliday called Flying Cars are Here: The Futuristic Present of Marketing which was a part of FutureM in Boston. There were 4 terrific speakers/panelists and the presentations centered around social networking (of course) and the Recommendation model.
I brought my sketchbook/notebook and as usual did a few drawings/cartoons. 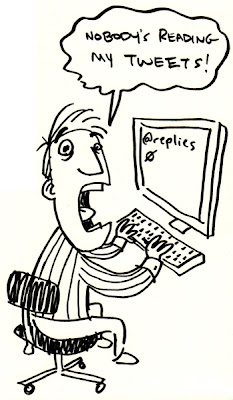 The first is self-explanatory. People make themselves crazy over whether they have enough followers (I was going to say "whether they're being followed" but that's a different topic) and the goal of getting comments. 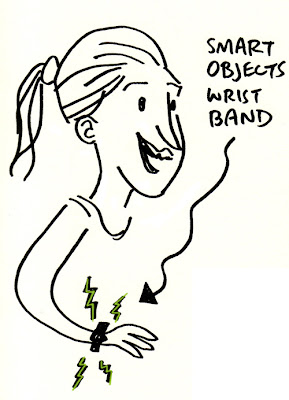 The next was about Smart Objects technology and a case study in Israel where marketing agencies created a Coca Cola Village to bring 'Likes' into the real world by using an RFID-enabled wristband which held attendees' Facebook logins and passwords (you can read a little more about it and watch a video here) and allowed them to 'swipe' what they were doing. I thought this was very cool (and so did the teenagers who took part). 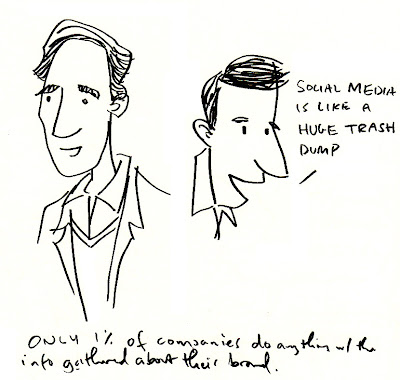 I also drew a couple of the presenters while I scrawled notes. The one on the bottom talks about the fact that although a lot of companies are gathering data they receive/find about their brand, only 1% of those companies actually do anything with that info. That's really going to start to change! Another thing mentioned was that there's an enormous amount of info being put out there by us all and going through it can be like going through trash in a dump.

It was a very interesting event, topped off by amazing infographics pooled during the event detailing stats on all the social stuff in the room, including, for example, the number of posts generated at the event (over 1300!). Nice job @djcap!

And finally, here's a photo I took during the panel discussion with my iphone. 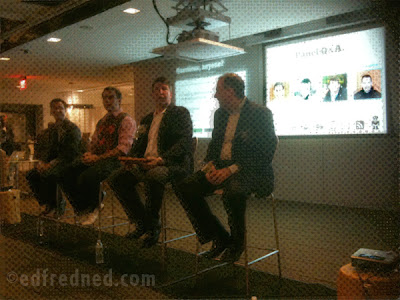 Posted by edfredned at 11:52 PM No comments: