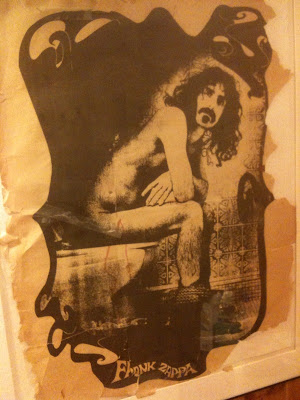 I took a quick va-cay in Vermont these last few days and came across this poster. I love the style, the subject matter is dead-on and even the way the poster is falling apart adds to the overall appeal. Where can I get one?

I saw the HELVETICA movie this week. Yes, it's a movie about a font, but it has a rich and interesting history and the movie is interspersed with a variety of designers (a few big names and then a few smaller ones) who either extoll the font's virtues or rip it to shreds.

It was nice to see how excited some designers were when they described HELVETICA while others were quite funny in their criticism (either of the font or those who use it).

I walked away uncertain whether or not I wanted to use the font ever again- and that's what this drawing is about.
Posted by edfredned at 12:08 PM 3 comments:

I went with my family to the Paul McCartney concert at Fenway Park in Boston yesterday and was wowed by the performance(s) and the venue so I decided to create a tribute. Illustrated above is one of Paul McCartney's guitars surrounded by the songs he performed.

Below is a photo I took on my iPhone which I had to enhance to try to get a better image (too many things conspired against me- a low-quality camera, bright skies behind a dark arena and vid screens that were often too bright for the camera to deal with). 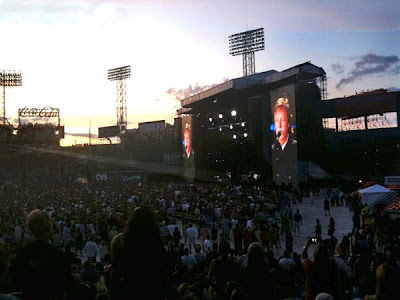 And then there is a video I took (again with the iPhone) of the light show and fireworks during Live and Let Die:


If you're a Beatles fan, this show would not have dissapointed you. What a great night!
Posted by edfredned at 11:36 AM No comments: 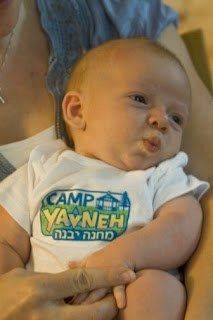 I was at a party with friends this past weekend when I spotted something familiar. A 7-week old named Jonah was sporting the logo that I had created for a summer camp! What a kick it was to see something I had designed, completely out of context and while in my civilian identity (when I wasn't working). Isn't he a cutie?

The logo went through many, many incarnations before we finally settled on this look, these colors and the gazebo which is one of the first things you see when you drive into the camp. I'm very proud of how it turned out.
Posted by edfredned at 3:56 PM No comments: