A new illustration for the chapter book: Twinventors 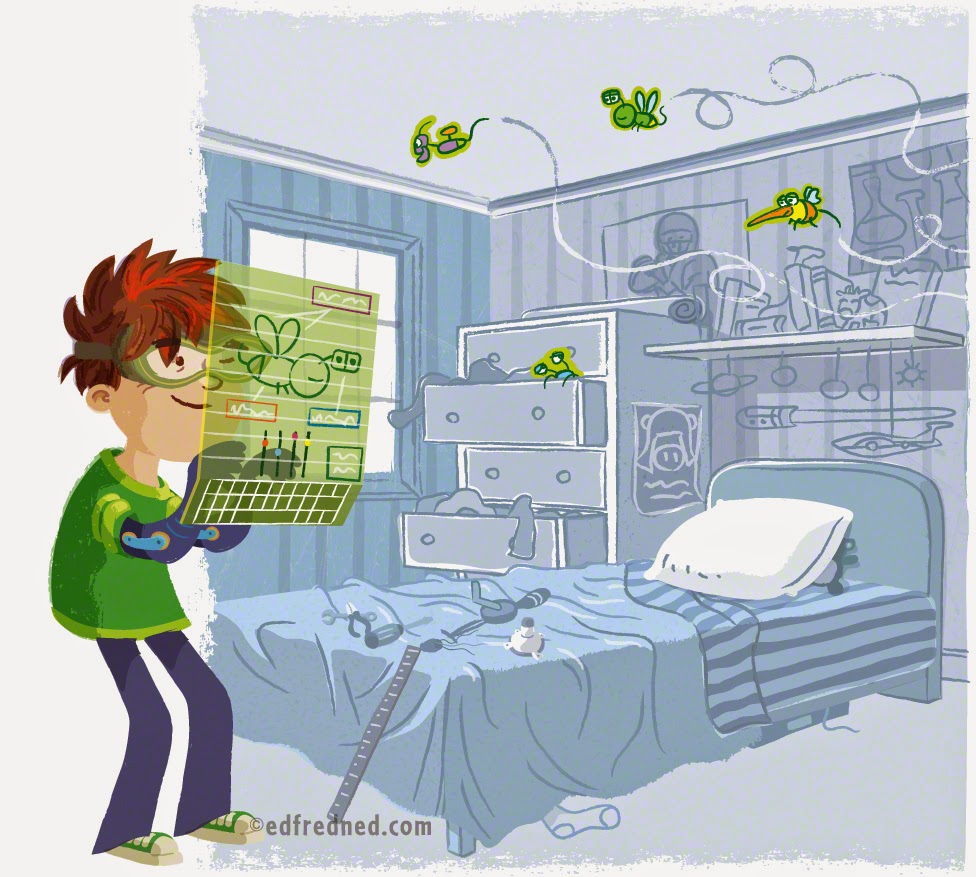 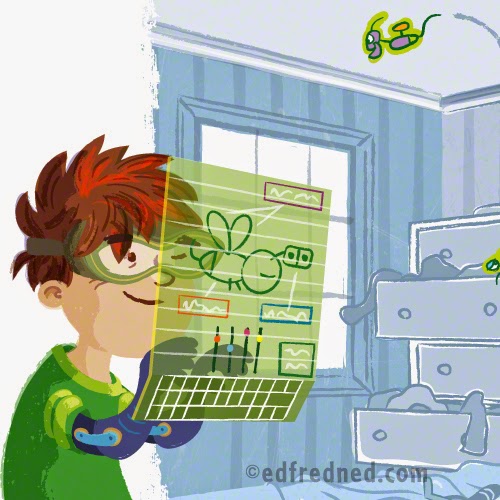 An illustration for Scholastic News 4, a weekly news magazine for fourth graders. The section of the magazine where my illustration appears is called Sticky Situation and it depicts a predicament that the kids need to figure out what is the right thing to do.

In this case, Patrick is cheating off Gwen's science test and although she doesn't want him to fail the class, she knows it's not right. 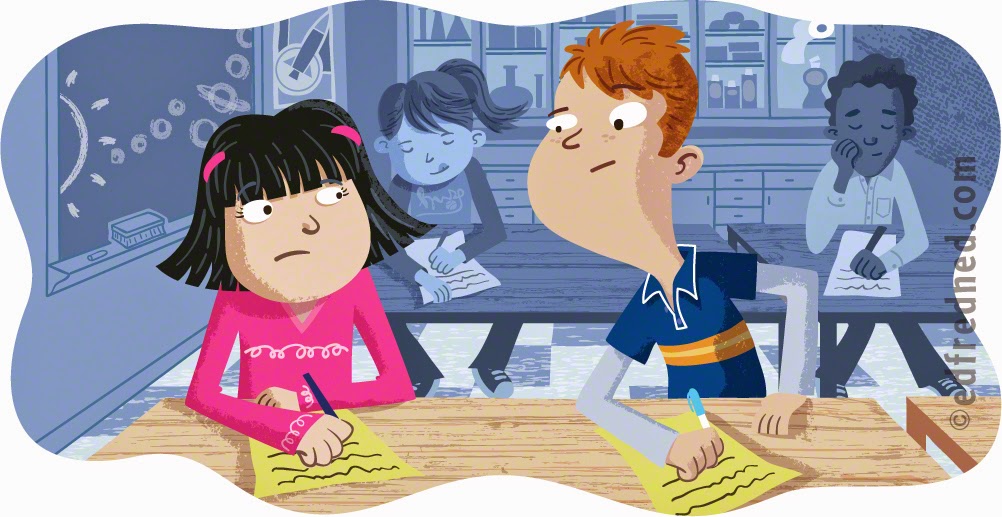 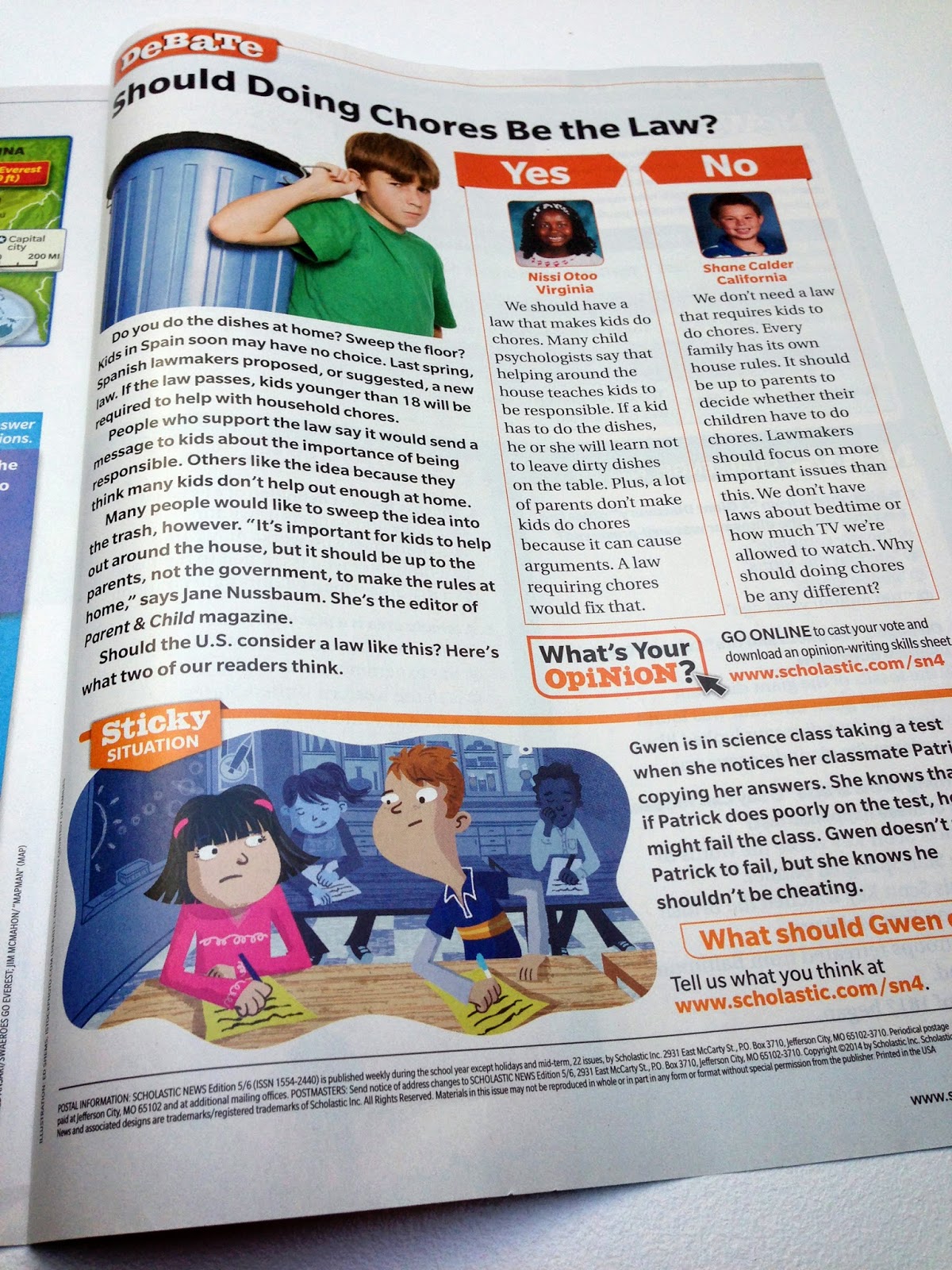 Here's a shot of the image in progress- before we decided to go monochromatic with the kids in the background: 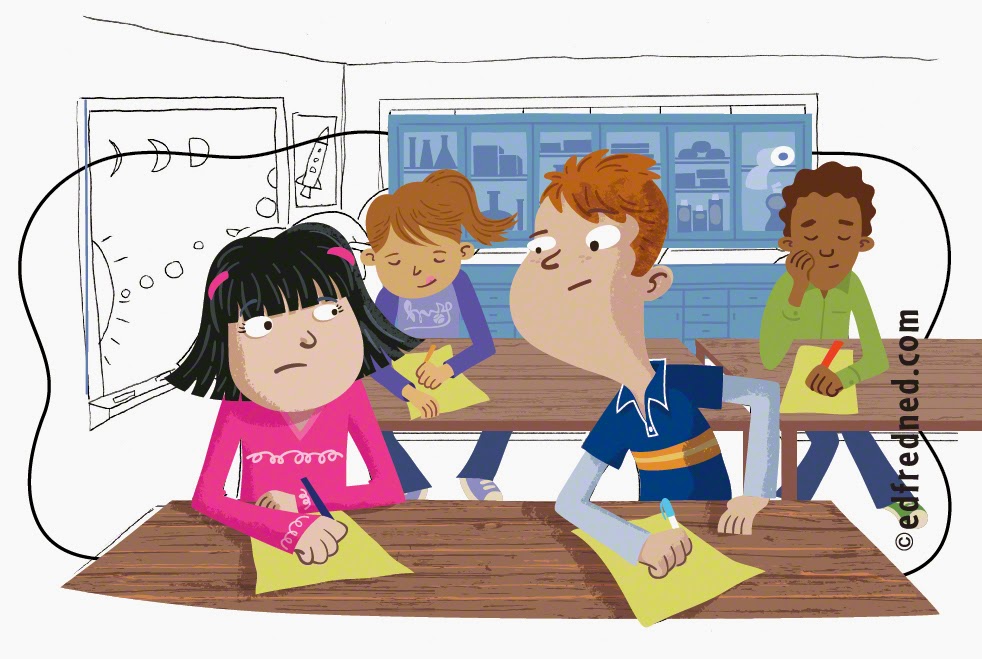 After this illustration, Scholastic hired me to do another 21 Sticky Situations, so there's more to come!

Posted by Edfredned at 11:24 AM No comments:

A short time after I designed the 1-2-3 Go Box (Happy Meal) for National Amusements/Showcase Cinemas, the art director contacted me to explore the possibility of creating an animation. They were considering having a short created utilizing the characters from the 1-2-3 Go Box to highlight their Popcorn Club for kids.

I've been creating animations with production by Zach of Cut to Create for a few years now and the above is one of our latest. Together, Zach and I wrote the story (based on conversations with the client and their goals) and once it was approved I began work on storyboarding and creating the (many, many) characters and backgrounds as well as other assets for the animator.

We produced a three second test animation with Timbuktoons which completely floored me. It just blew my socks off and was immediately approved by the client, and we were on our way!

Getting the theatre background right was a bit of a task. We didn't want to overwhelm the viewer but we also didn't want to shortchange the cinema chain by showing a less than stellar viewing room.

Here's one of the versions (with some characters only partially drawn): 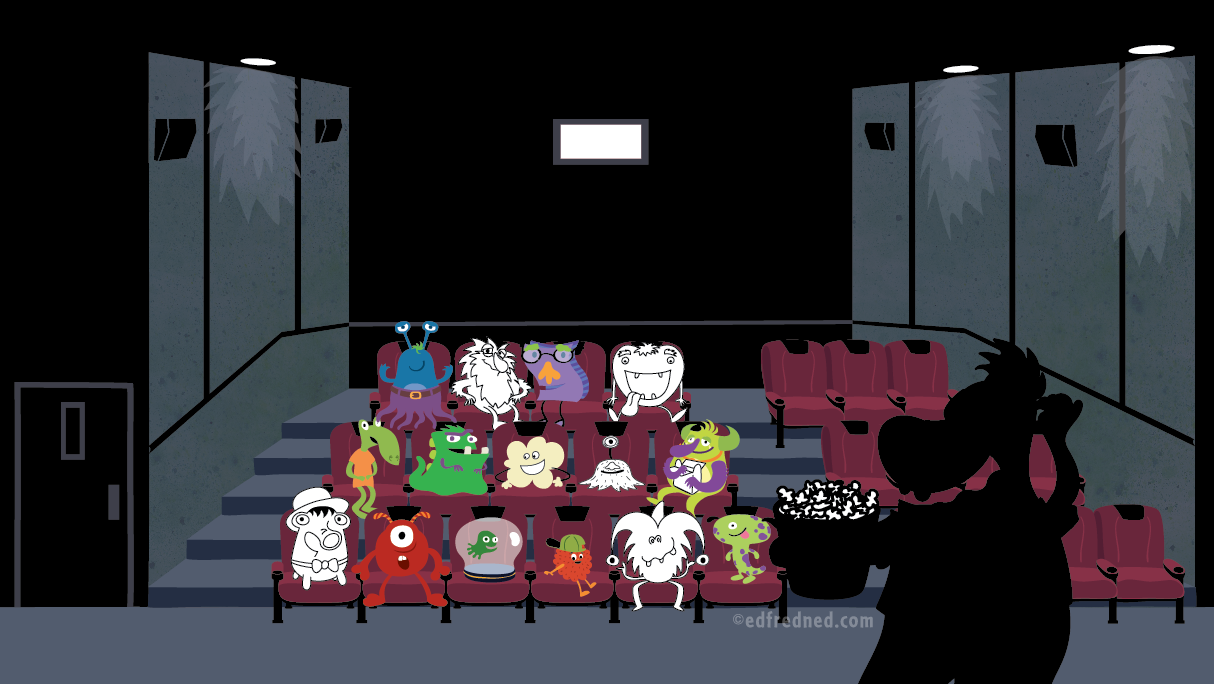 The above felt too stark so we upgraded by widening and adding another row for the final animation: 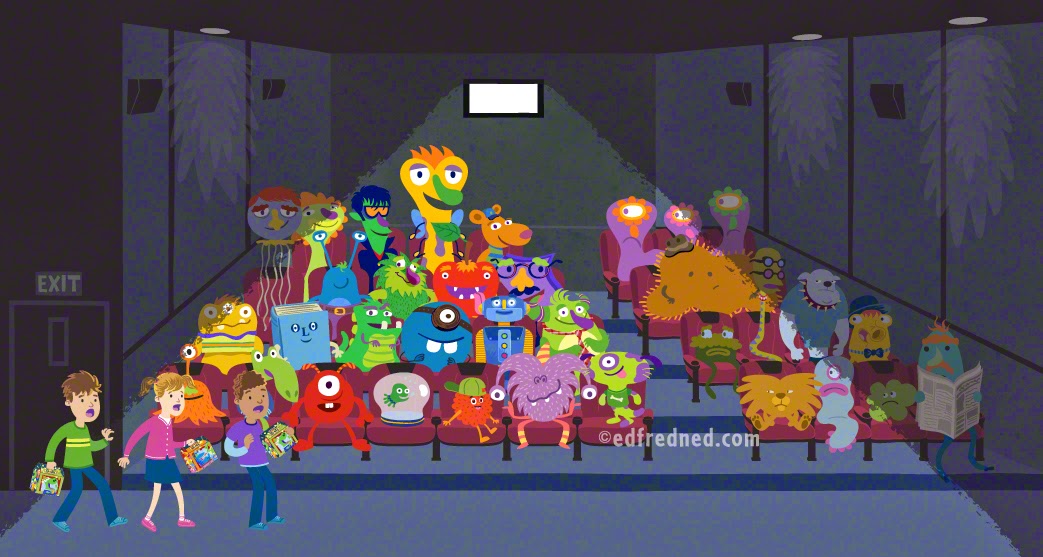 I considered using photos of the 1-2-3 Go Box for when they parachute down but instead decided to recreate them to look more simplified: As part of the project, I designed 36 characters for the animation, some of whom were based on characters in the 1-2-3 Go Box and the rest completely new. Here are a number of my faves: 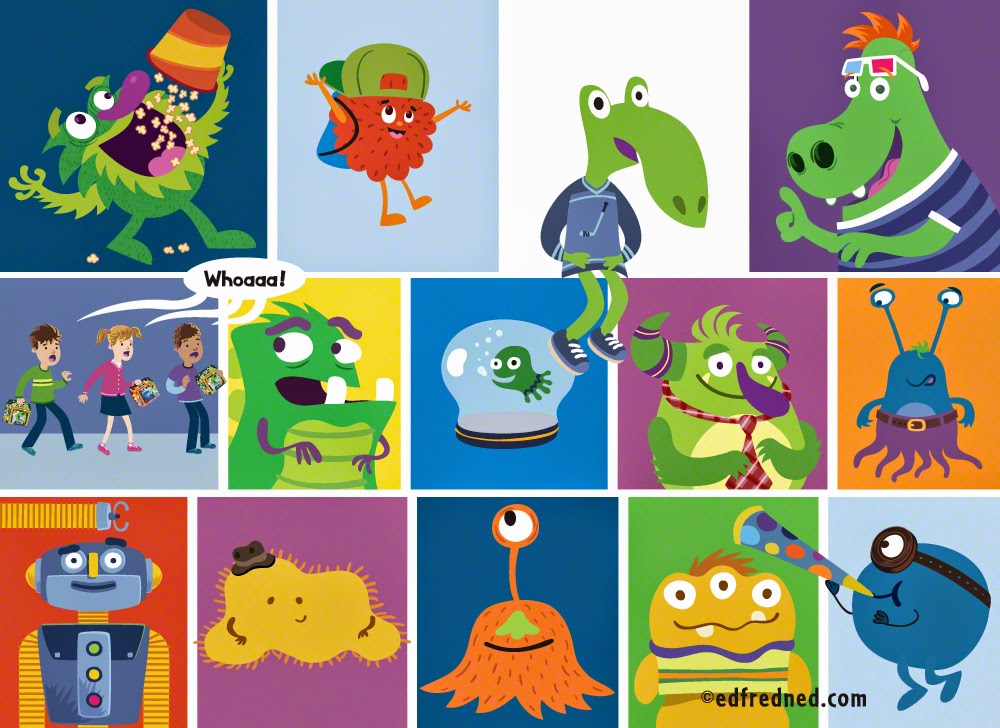 The animation hit theaters in the Summer of 2014 and plays before every movie at theaters offering the Popcorn Club or so I'm told. See it in person here.

This project then led to me designing and illustrating cardboard standees (6 feet tall, die cut) and posters for display in theater lobbies. More on that soon.

Thanks for reading this far!

I’ve been doing a lot of character development lately and from time to time I show off new characters on my blog. Sometimes they’re black and white and sketchy and other times full color and finished. If you want to see more from this series, just click this “characters” tag. You can also see a collection of characters in my Behance portfolio or on my website.
Posted by Edfredned at 4:02 PM No comments: