Drawn Together at ICON 7

It seems to me that trying to collect a large group of professional illustrators into one city for four days would be akin to herding cats into a doghouse, but somehow ICON pulled it off again. ICON, The Illustration Conference, recently concluded its 7th biennial conference, held this year in Providence, Rhode Island, with platinum support from the Rhode Island School of Design.
Illustrators and art directors came from all around the country, and some from different countries, to learn, network, and schmooze with their fellow illustrators from June 13–16, at the Veterans Memorial Auditorium in downtown Providence.
There were pre-conference workshops that split up the attendees into classrooms to cover character design, artistic anatomy, Adobe’s Creative Cloud, writing for comics, and self promotion. And there was even a soccer game. Those mini events were just preludes to the full conference where everyone was together in the main ‘tent’ (auditorium). 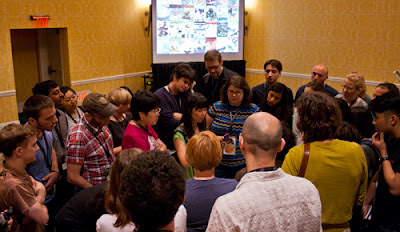 Art Director SooJin Buzelli’s workshop, Art Director’s Pet Peeves, is worth singling out for the sheer amount of useful advice she offered: 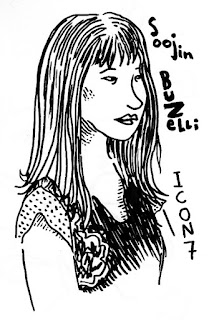 At the conclusion of her talk, SooJin poured out two week’s worth of mail and went through each promo postcard and explained why she was placing it on the save or recycle pile.
Drawn Together
Drawn Together was the theme for ICON7, and many of the workshops, presentations, and panels embraced the importance of collaboration. And not just collaboration between two illustrators but between illustrators and whomever could help them meet the needs of their clients in order to take a project from start to finish.
Illustrator to Animator: Christopher Silas Neal talked about pitching an animated short to Kate Spade. Once it was approved, he had to find someone to help him make the animation and score it. 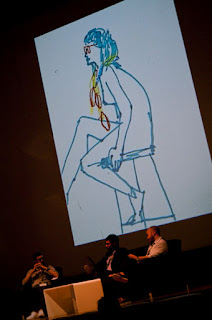 Illustrators to the Public: Josh Cochran and his studio-mate Mike Perry drew 33 different amateur models (friends, art directors, Craigslisters) for twelve straight hours on two consecutive days at five minutes a pose. They then hung up the hundreds (and hundreds) of illustrations for a very successful show. (They also pitched collecting the illustrations in a book but the idea didn’t get picked up.) You can see many of the final illustrations athttp://nudesbyjoshandmike.tumblr.com/
Illustrator to Teacher and Students to Video Producers: Kiel Johnson told an amazing story of begrudgingly teaching a friend’s art class and coming away with a final collaboration of which he is incredibly proud. You can see the trailer for the video that was created at http://vimeo.com/27064566.
Illustrator to Writer: Wife and husband team Robbi Behr and Matthew Swanson of the small press Idiot Books left their normal lives to live in a hayloft with no kitchen and write and draw quirky books for adults until the money ran out. They talked about the importance of doggedness and how it kept them going. For instance, by attending trade shows when they would rather be working, new opportunities were presented to them by certain show attendees. Six years later, they’re still going and now venturing into the children’s genre. 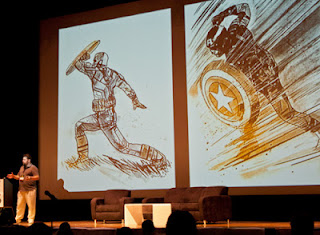 Illustrator to Filmmaker: Tommy Lee Edwards talked about designing and illustrating on-set to help a director firm his vision of a movie’s visuals during preproduction. A lot of the moodiness of The Book of Eli (2010) can be attributed to Edwards. And if Masters of the Universe ever gets off the ground, expect a very cool Edwards-inspired origin for He-Man.
ICON President John Hendrix explained that illustration is collaborative: “Stop thinking of ourselves as Han Solo (boasting about the Kessel Run) but as a contributor to the Rebel Alliance.”
UNDERWIRED
At this time it’s important to talk about ICON6. For those who missed it in 2010 and didn’t get to see Wired Magazine’s presentation on the Future of Publishing panel (you can still find it online), much was said of the death of illustration as a static art and the absolute need to move on to motion graphics. As an illustrator of 20 years, I remember the position I took right away on this premise and it was as close as a guy in his forties can get to the fetal position. And I certainly wasn’t the only one—many illustrators were beside themselves with outrage (and angst).
Fast forward to ICON7 in 2012, where a number of presenters knocked downWired’s premise. My favorite quote came from Tim O’Brien (his realisticCharlie Brown is eerie): “If something moves, we start watching and stop thinking.” Illustration is illustration and there will always be a need for images that every viewer gets to interpret in his/her own way. Go ahead and make your images move, but the impact and the market is not the same for motion as for illustration (with exceptions).
The Thursday night Keynote was “The Power of Communities” featuringKickstarter, Behance, and Etsy, who all offered words of advice on putting yourself out there in as many ways as you are comfortable and capable.
Make Your Own Work
As the conference continued, another informal theme, Make Your Own Work, was introduced by other speakers: 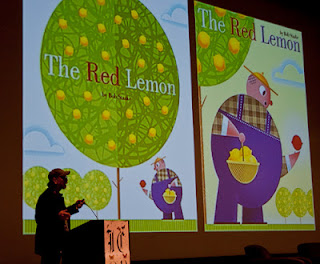 Bob Staake is a children’s book illustrator, as well as a hotly sought-after editorial illustrator with a growing number of magazine covers (most significantly The New Yorker) sporting his work. However, 75-80% of Bob’s work is self-generated. In other words, he’s not sitting around waiting for assignments to come to him—he’s creating and pitching all the time.
Jessica Hische (look up her poster Should I Work for Free) is extremely motivated. “Learn what you need to learn to make what you want to make,” is what she lives by. She believes that you should look for gaps and try to fill them. When you hear yourself say “Somebody should invent/do that,” you should do it yourself—which is why she created InkerLinker.com andDontFeartheInternet.com.

In a 90-minute workshop, Josh Cochran and Christopher Silas Neal showed us how to quickly construct and illustrate our own ‘Zines (see photos), get them photocopied, and get them out to people which could lead to… who knows?
Julia Rothman talked about starting out creating textile prints to sell at shows and quickly realized that there’s more (royalty) money to be made in licensing. And she retains ownership of her work!
The 99% 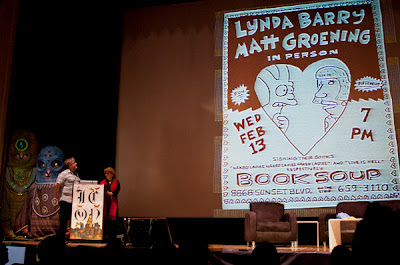 At times it got a little depressing to hear many of the same illustrators mentioned during different presentations by the likes of Rolling Stone, Abrams Publishing, and others. But take heart if you are not one of the elite. Adam Rex, somewhat tongue in cheek, offered an inspirational poster with a photo of a catfish captioned “Aim Low: They Wouldn’t Call it Bottom-Feeding if There Wasn’t Any Food Down There.” The context was that he was trying to break into children’s publishing without much of a portfolio of work for the field, so he found publishers who were not very discerning and this led to other, more prominent work. From this we can learn—and also take comfort—that each opportunity will lead us to the next.


What had to be the highlight for nearly every ICON7 attendee amid a large number of noteworthy presentations was the keynote given by Lynda Barry with her special guest, Matt Groening, creator of Life in Hell and The Simpsons (he walked out in a Marge Simpson mask). The title of her talk was “Writing Comics in the 21st Century,” but what we were all treated to was something between fantastic storytelling, stand-up comedy, and inspirational speaking. And that was just Lynda. Groening, who was Barry’s boyfriend in college and has remained a very close friend, let us take a look at a number of his Life in Hell cartoons (which he and Lynda so entertainingly brought to life). Then they both talked about productivity, why Lynda loves Family Circus, when sometimes a job just isn’t worth doing, and most importantly the power we have as visual artists to create work that elicits a response from the viewer and allows us to express ourselves. 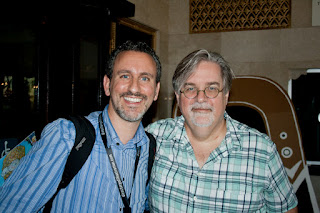 The Bazaar Rhode Show
At the conclusion of the day on Friday was the Bazaar Rhode Show, where attendees could elect to showcase their work and, just as importantly, sell their wares. On display and for sale were comics, mugs, graphic novels, collections of work, prints, shirts, jewelry and greeting cards. And I must add, I was very impressed with the very professional-looking set-ups and the excellent quality of the items for sale.
In Conclusion
I’m proud to report that illustration is alive and well; individually, we need to keep working on finding the jobs we want to do. And we shouldn’t be afraid of getting in too deep—you can always collaborate with someone who can fill in the gaps. Membership in an organization such as the Graphic Artists Guild and participating in events is a great way to network and meet creative professionals with different abilities.
As illustrator/type designer Jessica Hische (have you checked out her sites yet??) said: “Do what you do best and delegate the rest.”
Posted by Edfredned at 10:46 PM No comments: 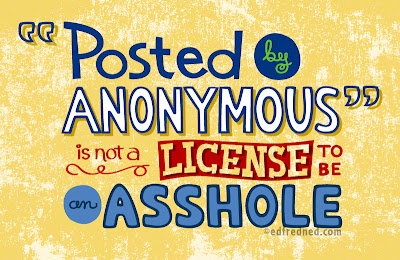 I thought I'd play around with hand-lettering while also trying to make a point. One of my favorite blogs to read was recently closed due to many anonymous commenters being exactly what my poster says they are.
Posted by Edfredned at 10:07 AM No comments: